Bread is a wonderful food, a great base for many meals and it plays a big part in virtually every food culture. Whilst Italians may not eat quite as much as many other Europeans do, they do eat it virtually every day and Italian cuisine is a wealth for regional bread variations.

Much like the rest of Italian food culture, however, there are some important rules to bear in mind when it comes to eating bread. Most importantly, bread should always be eaten with other food, but it should not be eaten with a starchy meal. So you’ll rarely see it served with pasta in Italy!

Italy has an incredible variety of breads, with many regional versions of flatbread, sourdough and your traditional loaf. It’s definitely worth trying some of the specialist breads that are available – you’re sure to find a new favourite! 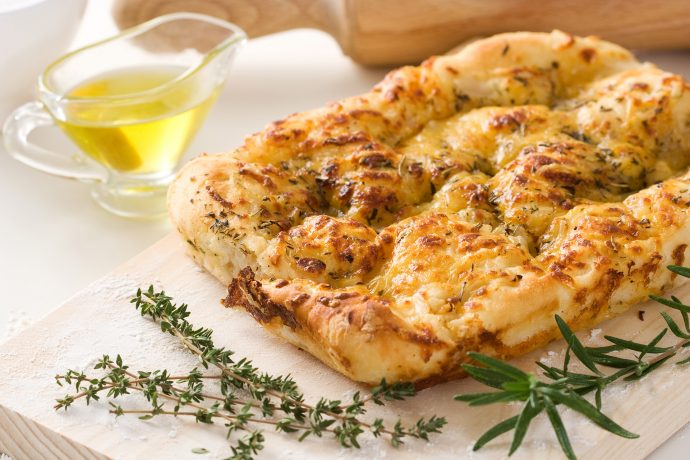 Focaccia is an oven-baked flatbread with a similar texture to pizza dough. It’s believed that the Romans invented this style of bread – but they cooked theirs on the hearth, which produces a far crispier version than modern-day offerings.

The simplest styles of focaccia are topped with herbs and drizzled with olive oil, but you can also buy quite elaborate versions topped with vegetables or meats. 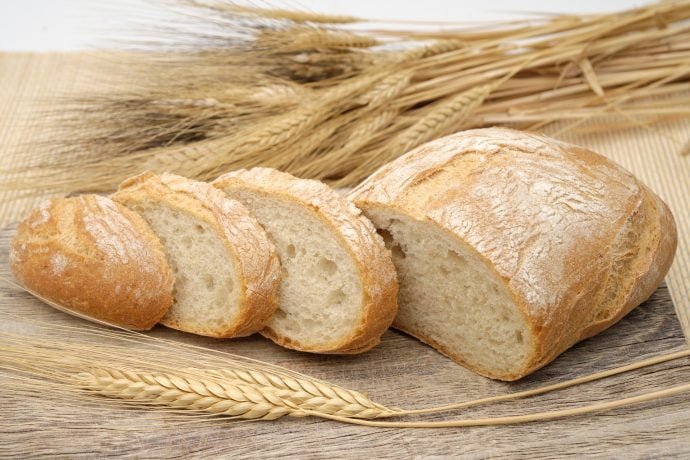 Literally translated as “Tuscan bread”, this beautiful bread is a regional specialty of Tuscany. This is a large round, springy bread that is similar to a white loaf, but much flatter. Traditionally, pane toscano is cooked in a woodfired oven giving it a unique flavour, and it’s great for mopping up a Tuscan soup or stew! 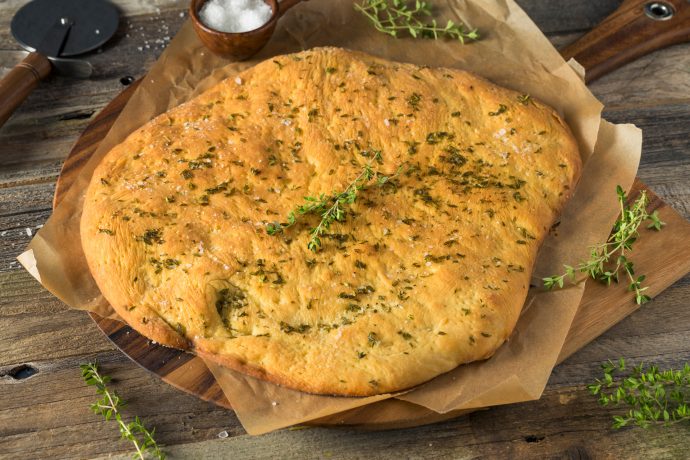 As the name suggests, this addition to our list is a cross between pizza and bread. The dough is rolled out quite thick, which is why it looks more like bread than pizza when it comes out of the oven!

Usually topped with some mozzarella, a few olives and served hot with a little olive oil – you should definitely try this bread if you get the chance! 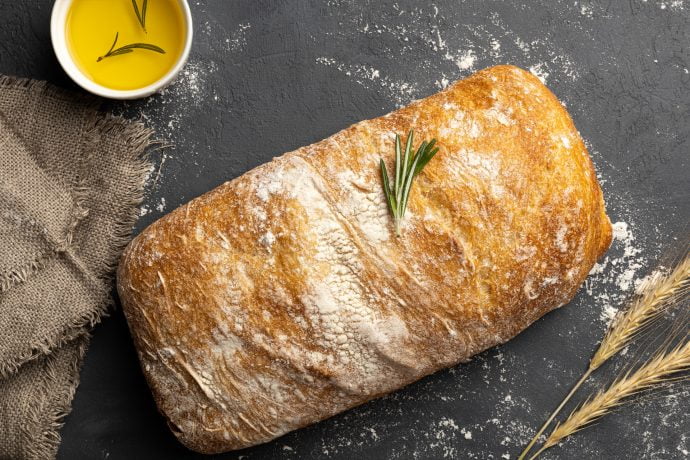 Perhaps the most well-known and popular Italian bread, ciabatta is a slipper-shaped bread. It has a unique, almost plasticity, texture, which makes it possible to do practically anything with this bread.

Interestingly, it is not strictly a traditional Italian bread – ciabatta was created in Italy in 1982 by an Italian miller called Arnaldo Cavallari – so can be viewed as a modern classic! 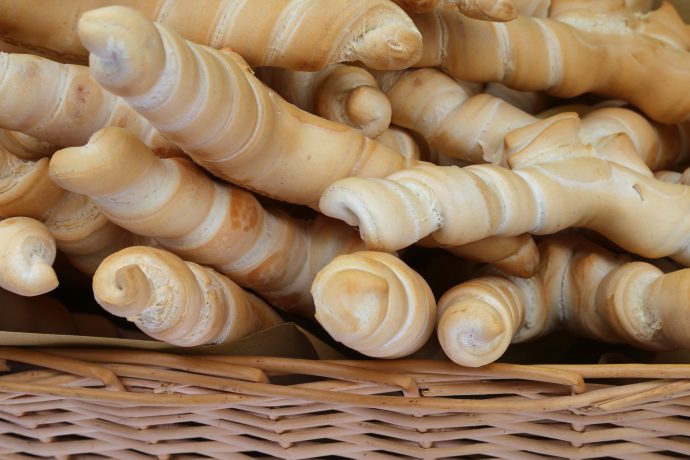 One of the most popular styles of bread worldwide right now is sourdough! If you’re a big sourdough fan, you should definitely try the Italian version of Coppia Ferrarese. This unusual bread even has a Protected Geographical Indication, which means at least on stage of its production must take place in Ferrara. The bread gets its flavour from that malt used to make it, coupled with its very distinctive shape (created by twisting 4 strands of dough together into a cross-shape), it’s a really unique bread! 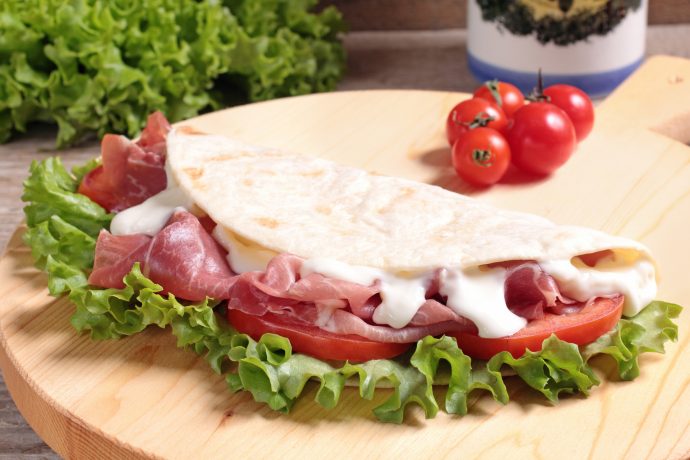 Originally a staple for the poor peasantry of Emilia-Romagna, this flatbread has now been awarded a Protected Geographical Indication status and has a special place within this region’s cuisine. The nineteenth century poet Giovanni Pascoli even wrote an ode to it with La Piada calling it the bread of poverty, humanity and freedom.

Crusty on the outside, soft on the inside – ciambella is a great rustic style of bread found in Puglia and the Basilicata areas of Italy. The dough is rolled out into a thick sausage and joined together in a circle shape to be baked, giving it its distinctive appearance. 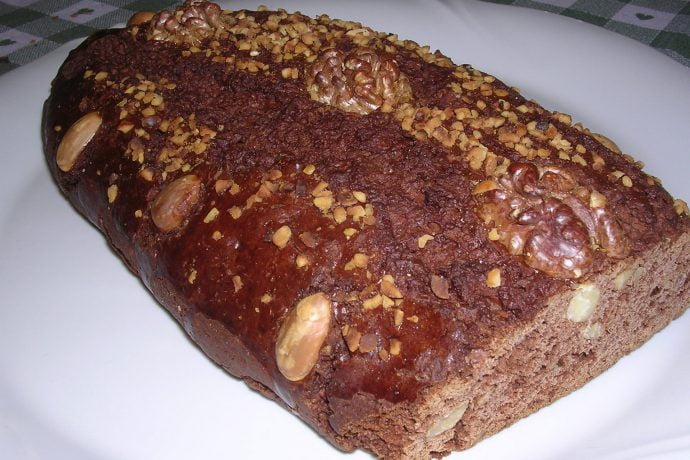 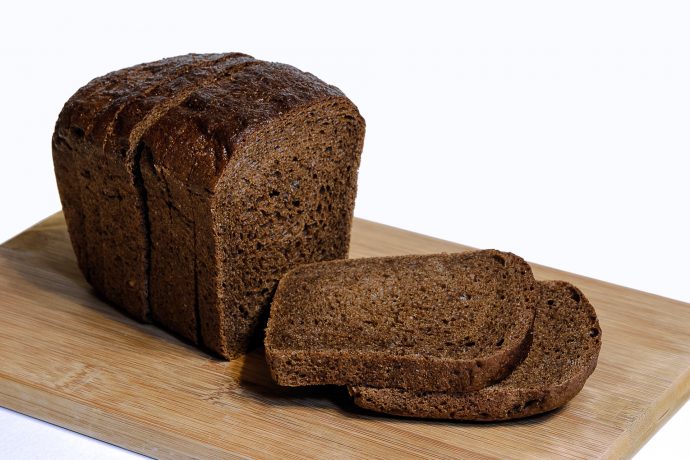 Pane di Segale is the Italian version of rye bread. In Italy, there are very few brown loaves available as virtually all wheat is milled to be white flour. Pane di Segale is a particularly nice variation of this style of bread – closely textured with a thin crust, but is still soft and moist.

Altopascio is a traditional saltless bread hailing from Lucchesia in Tuscany. Generally a rectangular or elongated shape, with a crunchy gold crust, this bread dates back to the middle ages. Altopascio is produced using wheat flour, giving the bread a unique earthy taste. It’s a great bread to have to accompany cheeses and cured meats, especially with a bit of salt and olive oil. 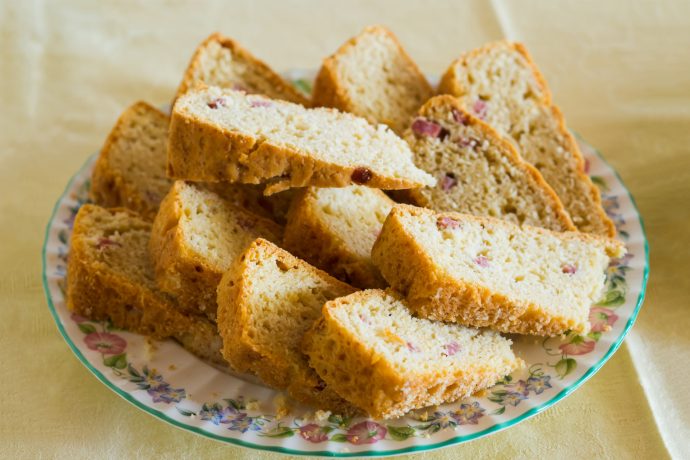 A Neopolitan savoury bread, baba rustico is traditionally prepared for parties or to celebrate various festivities. Once the basic dough has been prepared, it is filled with salami, prosciutto cotto, grated parmesan or grana padano, and cubes of provolone, scamorza or fontina cheese. 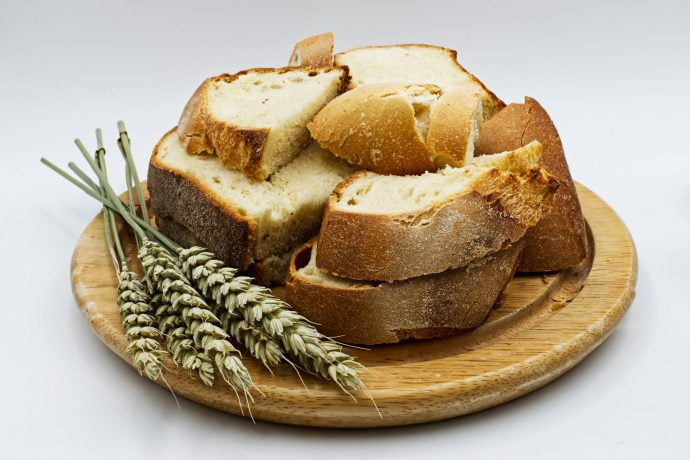 The origins of pane Pugliese are found in the 15th century, brought across by the Turks who ruled the south of Italy at this time. A peasant-style sourdough bread, this crunchy-crusted domed loaf is richly flavoured due to its long fermentation process and is perfect for bruschetta! 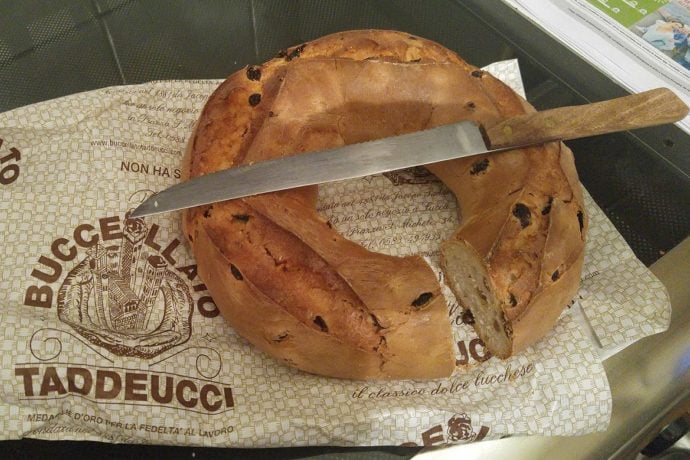 Buccellato di Lucca is a popular sweet bread filled with raisins and aniseed, and coated with sugar. Buccellato is a specialty from the province of Lucca in Tuscany. Invented in 1450 by local confectioners, it was mostly prepared for the church confirmations of the local wealthy elite. Nowadays, it’s an everyday food staple in the region. 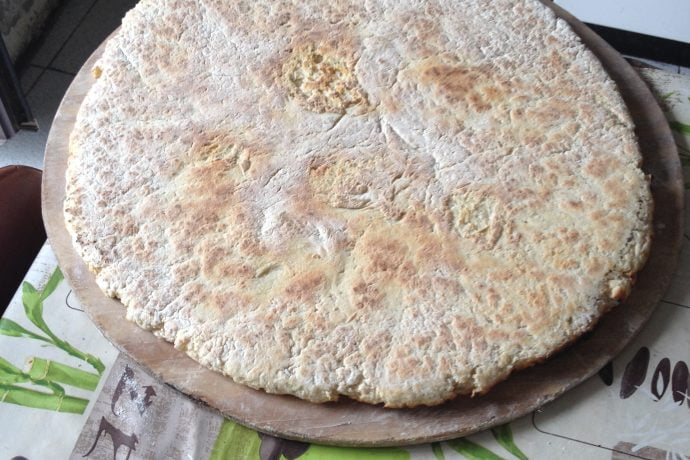 Also known as crescia, torta al testo hails is a griddle bread originating in Umbria. It is named after the circular pan (testo) that is used to prepare it. It is a traditional flat bread, often stuffed with prosciutto, leafy greens, and cheese.

Fugassa, or fugassin, is a Venetian focaccia traditionally prepared for Easter. It’s a simple bread dough enriched with eggs, butter and honey to create a yeasted sweetbread. 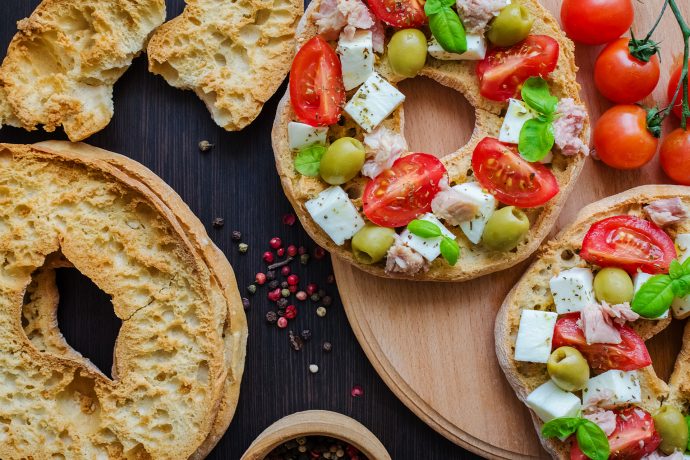 The friselle, or frise, is a rusk bread which comes from Puglia, ideal for farmers out in the field or the fisherman headed out to sea. The rusks are double-baked, meaning they have a long shelf-life, and are usually soaked in saltwater before being served – often with fresh tomatoes as frisella Salentina. 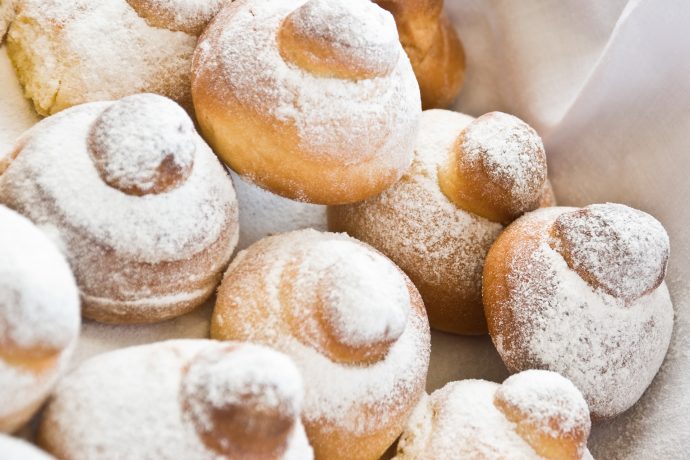 This Italian version of brioche hails from Sicily, and is characterized by its tuppo – a round top bun which should be removed and eaten first. Made with honey, butter, and often enriched with orange or lemon rind, saffron or apples. This bread is supposed to be sweet and is served with granita or gelato!

Another Tuscan bread for the list, the filone is similar to the famous French baguette in shape. Its name comes from the word filo which means line – referring to the shape of the bread. Made with flour, olive oil, yeast, water, and salt, filone has a hard crispy crust and a light airy crumb inside. 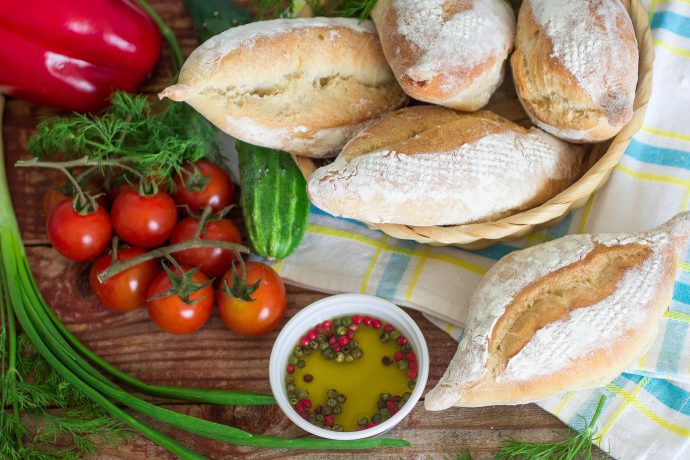 Another bread linked to the Romans, ciriola is a traditional bread that is crusty on the outside and soft inside. Its name refers to the shape of the bread, as ciriola means candle in Italian, as the rolls are shaped like flames. Perfect for panino when fresh, it’s also great to make crostini with the next day. 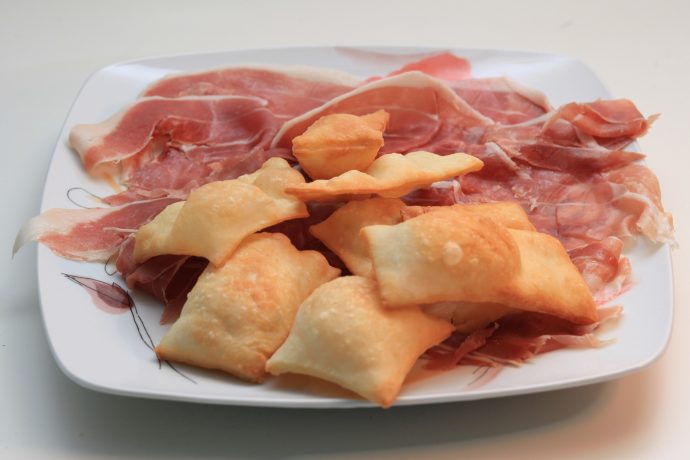 Found through Bologna and the Emilia-Romagna regions, crescentina are crunchy little pockets of fried dough, served hot. The puffed bread is served with soft cheese, cold cuts of meat or sweet versions are served with jam and chocolate spread. 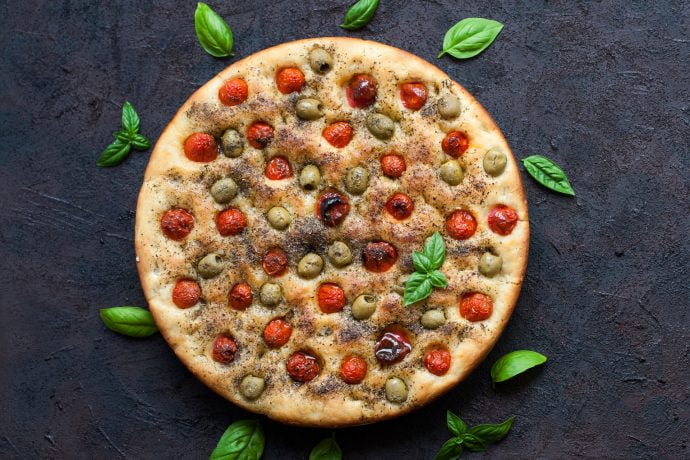 The Pugliese version of focaccia, focaccia barese is prepared with semolina, wheat flour and potatoes. It is then topped with cherry tomatoes and olives, with local variations including other vegetables, salt and rosemary. This bread is best served warm, with a dousing of olive oil!

Tell us about your favorite Italian bread!

If you have already been there and tried some incredible bread from Italy that we haven’t mentioned here, please let us know. We are passionate about food and travel, so we love to hear about your discoveries. 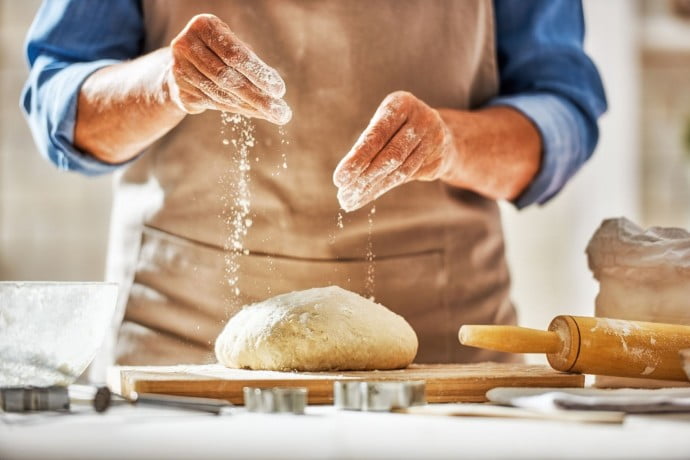 Our chef Jane Curran will take you through how to make Ciabatta, Focaccia, Schiacciata con l'uva and last but not least the famous grissini. 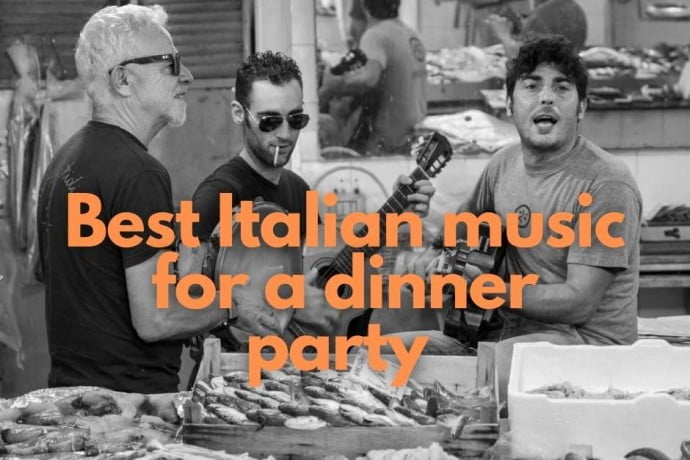 The Best Italian Music for your Italian Dinner Party » 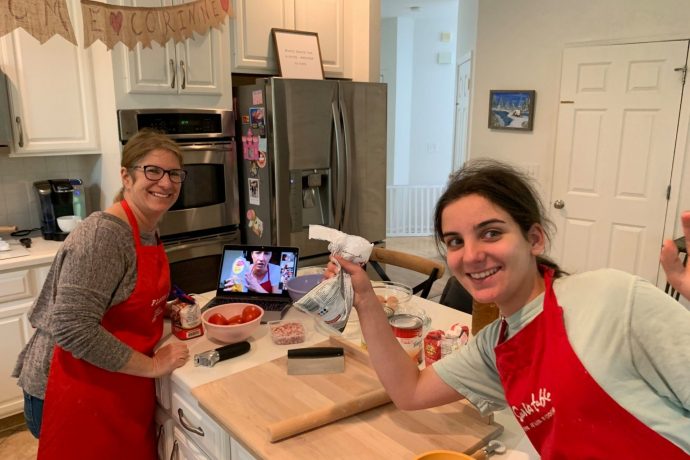 Everything You Need to Know about Italian Cooking Online »