How Italian Food Has Conquered the World

Italians have long been travellers; from the Romans off to conquer the world, Venetian merchants in search of goods and fortune, Marco Polo and Columbus on the hunt for new lands, and mass emigres in search of wealth.

And where ever Italians travel, their food goes with them.

There is evidence that the Romans brought a variety of new foods to Britain, livening up our BC diet with garlic, onions, shallots, leeks, cabbages, peas, celery, turnips, radishes and asparagus, as well as rosemary, thyme, bay, basil and mint; as well as a fair few gallons of red wine.

We now think of Romans tucking into feasts and wine with Latin brio – it was already part of their identity. In Britain, however, we went on to use these new ingredients in our own traditional ways, adding them to dull stews and broths.

What we now think of as Italian staples – pasta, pizza, risotto, ice cream – didn’t even become popular in Italy until much later. Some say Marco Polo brought pasta back from China, but this is disputed.

It’s likely it had been growing in popularity in Italy from the early 13th century onwards.

Since the fall of the Roman Empire, when Italy became a collection of autonomous regions, those regions have partly defined themselves with food.

Fierce pride about each regional speciality has led to the production and promotion of some wonderful dishes, many of which have found their way around the world. Ever since the Italian Unification in 1861, these regions retained their identities with culinary specialities. 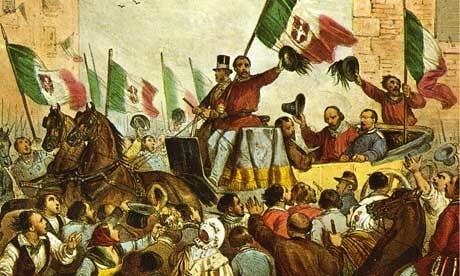 The modern global love of Italian food began with the mass emigration to the United States in the late 19th and early 20th century. Between 1876 and 1930, 5 million immigrants arrived in America, four-fifths of whom were economic migrants from the South.

American chronicler of Italian food and its history, John Mariani, says, ‘Neapolitan immigrants did bring their favourite street food to America – the pizza, which they ate with the crust folded over, as a kind of sandwich or snack.’

Soon, pizza wasn’t just the ex-Neapolitans’ snack of choice as pizzerias sprang up across America’s Eastern seaboard. By the 1950’s they were everywhere and the popularity of eat-in and take-out pizza had begun to soar. This inexpensive, hot, satisfying pizza was on its way to conquering the world.

Pizza exemplifies this – bread, tomatoes, cheese, maybe a leaf of basil. The classic Margarita pizza combination was dreamt up by Raf­faele Esposito, where his restaurant Pizzeria Brandi is still in Naples, when the new Italian queen visited the city in 1889. 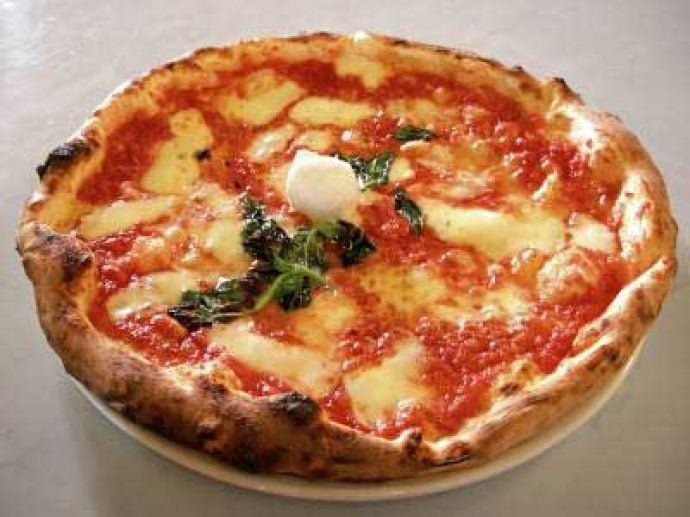 The pizza maker named a pizza after her, pizza alla Margherita, using the colours of the new Italian flag: red toma­toes, white mozzarella, and green basil.

This was a great marketing tool for the humble pizza.

In the 1930s, a variety made with slices of beef and its juices topped with sweet peppers gained popularity, and in Connecticut became known as a submarine – or sub.

A local son of an Italian immigrant set up a ‘sub shop’ to raise money for college. This gradually evolved into Subway sandwich shops, with 16 units by 1974, growing to more than thirty thousands in over 90 countries today.

But many of us still remember the Seventies, when basic Italian ingredients weren’t readily available outside Italy. It wasn’t until the late Eighties and the Mediterranean Food revolution that olive oil, pasta, even tinned tomatoes began to be widely imported to the UK and elsewhere. 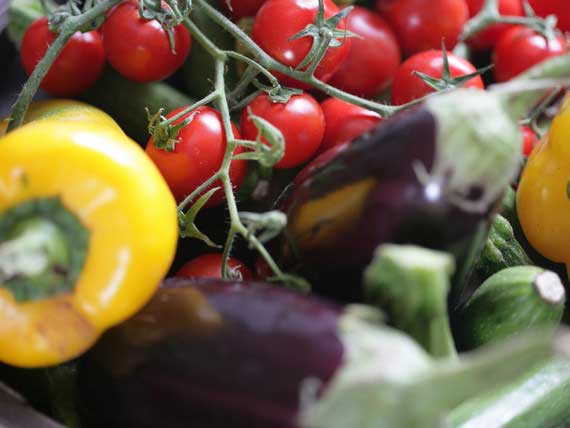 Around this time, Brits started to go out to eat Italian food – partly buying in to a romantic idea of La Dolce Vita, sunshine and Italian style.

We found these trattorias relatively inexpensive, pleasingly egalitarian and relaxed; a large bowl of pasta or a pizza and a decent bottle of Chianti snug in its straw casing cost little more than eating in.

Until then, most wine in the UK was expensive and French. We liked it, and kept coming back. It wasn’t too long before chain stores, such as Pizza Express, began to pop up alongside those independent Italian trattorias.

Those quick off the mark began importing the essential items needed in the growing crop of Italian restaurants. These inclued: extra virgin olive oil, balsamic vinegar, fungi porcini, white truffles and true prosciutto, which were rarely seen outside Italy.

And as these items arrived, the supermarkets picked up on the trend and started to sell spaghetti, olive oil, Parmesan cheese and more – not to mention decent ground coffee.

It was then that we began to try out these things at home, and discovered that spaghetti alla Bolognese wasn’t too tricky to make ourselves.

Other countries and cultures have of course had huge culinary influence worldwide. Indian and Chinese foods, and more recently Thai, are immensely popular and began in a similar way.

But Italian food is more popular, when you consider the size of the country and its population, compared to other countries.

So why was Italian food so popular?

Firstly, the reasons start with that large influx of Italians to America. Italians are great marketers of their own food – those lovely cheerful restaurants, the idea of the dolce vita and huge confidence in their own cuisine. Therefore, Americans loved it.

But secondly, the key Italian ingredients are easy to import. Dried pasta couldn’t be easier to transport – it’s dry and doesn’t go off. And the same goes for tinned tomatoes. 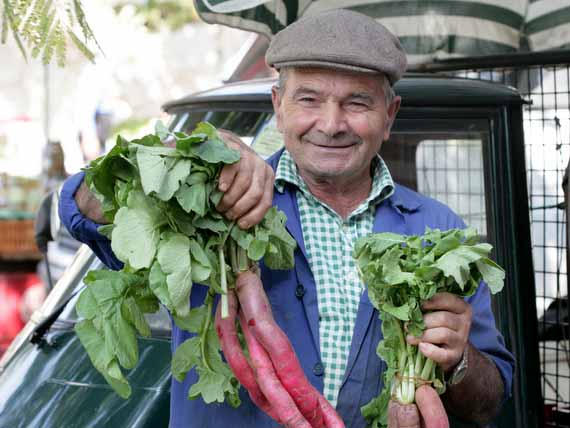 As a final thought, it’s worth remembering that we have only looked at the general perception of Italian food that has spread so wide and successfully across the globe. Therefore, to fully understand Italian cuisine, we suggest visiting regions of Italy to taste their home-made traditional food. This is because the reality of regional Italian cuisine is far more diverse and sophisticated.

As the writer Umberto Eco said, “To come to know Italian cuisine in all its variety is to discover the monumental differences, not only of language, but of taste, mentality, creativity, sense of humour, attitude toward suffering and death, loquacity or taciturnity, that separate a Sicilian from a Piemontese or a Venetian from a Sardinian.”

So if you want the best Italian food with all its regional specialities, it’s still best to hop on a plane to Italy. Check out the latest Flavours Holidays to Tuscany, Venice, Sicily, Puglia, Amalfi, and Bologna to practice cooking the famous Italian cuisine.