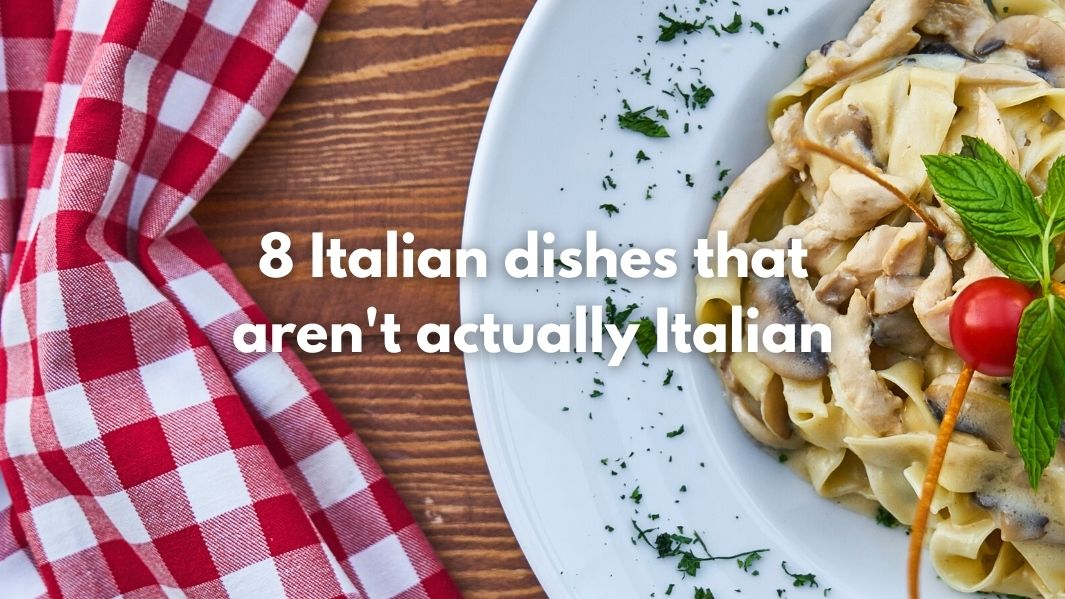 Italian food is one of the most popular cuisines in the world, with dishes like pizza and pasta served far and wide. However, whilst a number of our favourite “Italian” dishes still have their roots in Italy, many of them have been modified over the years as they’ve become more popular. In fact, it may surprise you to know that many of the dishes that we might consider as typically “Italian” aren’t actually Italian at all.

Food is such a big part of Italy’s culture, which means that Italians can be very strict about how it’s prepared and cooked. What shape of pasta goes with a particular sauce, when to drink certain types of coffee, and which herbs or other ingredients that must or must not be added to certain dishes are all considered matters of great importance. But as always happens with immigration, dishes change when they get to another country, adapting to the tastes of the people who live there, and the ingredients available. So, many dishes you may have thought were classically Italian, are in fact adaptations, and are very hard to find in Italy itself.

If you want to learn to make authentic Italian dishes, why not join one of our online cooking classes? You’ll learn from our talented Italian chefs, and have fun with new friends at the same time! Below we’ve looked further at some classic examples of “Italian” dishes that aren’t actually Italian! Some of them may surprise you…

Head to Bologna, and you won’t find spaghetti served with Bolognese sauce, only tagliatelle. Emilia Romagna, where Bologna is the capital, serves “ragu alla Bolognese” – ‘ragu from Bologna’. The sauce is called ragu, not Bolognese. We’re really only just starting to use the word ragu in the UK to describe a meaty pasta sauce. Tagliatelle is used rather than spaghetti because it holds the meaty sauce better. Another big difference is that a true Bolognese ragu will be much meatier than the tomato-heavy sauces we serve in the UK; they’ll use just a little tomato paste and no chopped tomatoes at all. The authentic ragu recipe, documented by the Accademia Italiana della Cucina, and subsequently recorded by Bologna’s Chamber of Commerce, limits the ingredients to beef, pancetta, carrots, celery stalks, onions, tomato paste, white wine and milk. 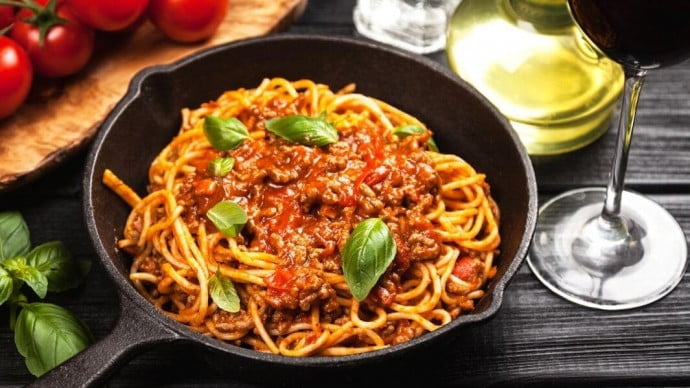 Can you believe this isn’t a traditional Italian dish?!

Spaghetti, yes; meatballs, yes. Together, no way. Italian meatballs are called “polpette”. In most regions of Italy, polpette are fried and eaten as they are, mostly as a second course without sauce. Something which is sometimes done in Italy is inserting a small cube of fontina cheese into the middle of each polpetta before flouring and frying. This gives them an oozing centre when broken into. In southern Italy Italian meatloaf, or “polpettone”, which literally means ‘big meatball’, is often served with a tomato sauce that is prepared directly in the pan with some onions and diced tomatoes. In this variation, you baste the polpettone with the tomato sauce, but it is never served with spaghetti. Leftover polpettone can be used for sandwiches – or panini, as Italians call them. This is perhaps the origin of the American ‘meatball sub’. 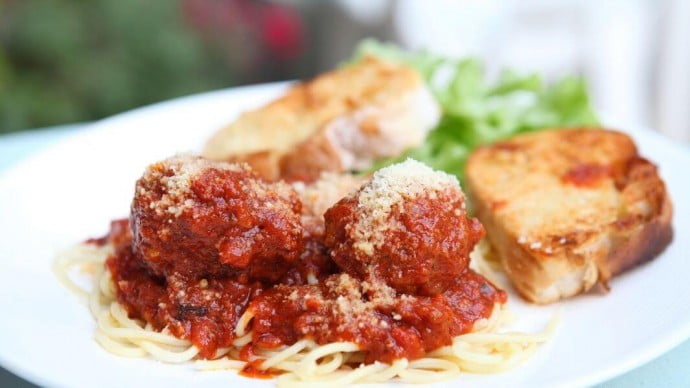 Did you know it’s called polpettone in Italian?

The Italians do eat garlic rubbed on toasted bread – with olive oil, not butter – and call it bruschetta. But they will toast an Italian bread such as ciabatta, not a French baguette, as has become popular in the UK and America. And you definitely won’t find it served with pizza or pasta – it will be given as an antipasti. The most common bruschetta is served with freshly chopped tomatoes and a sprinkling of salt and a drizzle of good olive oil: bruschetta al pomodoro. 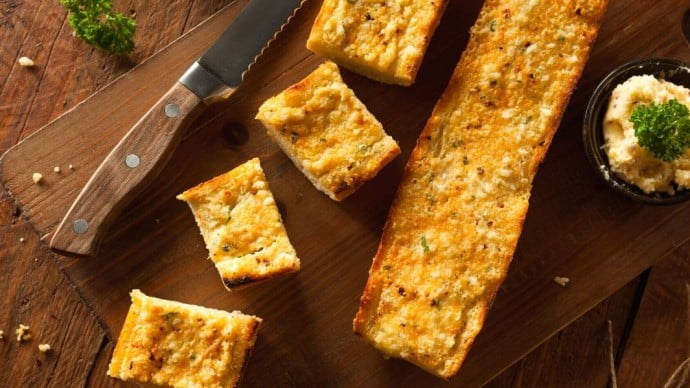 No garlic bread with pizza or pasta?!

In America and the UK, we often top our pizzas with pepperoni. But in Italy, “peperone” means peppers – as in bell peppers. You’re more likely to get a pizza topped with “prosciutto crudo” than a spicy salami. It’s said that the meaning of the Italian word “peperone” got confused when Italians began to immigrate to America, and started to mean meat rather than peppers! Despite this, it is occasionally served in some Italian restaurants, but it will always be called spiced salami not pepperoni. Pepperoni is an American-invented word. 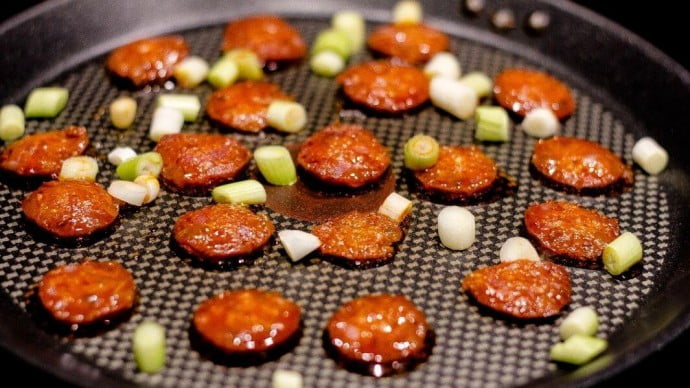 Of course, espresso is a drink in Italy, it’s just not usually called that – it’s simply un caffè. A double espresso is caffè doppio. The most common coffee is a single espresso shot – un caffè – served at drinking temperature and drunk standing up at the bar. While we’re on the subject, Italians only drink coffee with milk in the morning. Either cappuccino or one of the forms of caffé latte: caffè macchiato (espresso plus a dash of milk) or latte macchiato (hot milk with a dash of coffee).

Don’t simply ask for a latte, or you’ll get a glass of milk. And don’t order a vente anything if you’re a Starbucks fan, as it literally translates as ‘twenty’; nor a hazelnut-syrup soy milk frappuccino. The Italians keep things classic and simple – they won’t have an option of skimmed or full-fat milk, for example. If you really want to look like a local, order caffè corretto first thing in the morning, a pick-me-up espresso with a dash of grappa or other spirit. 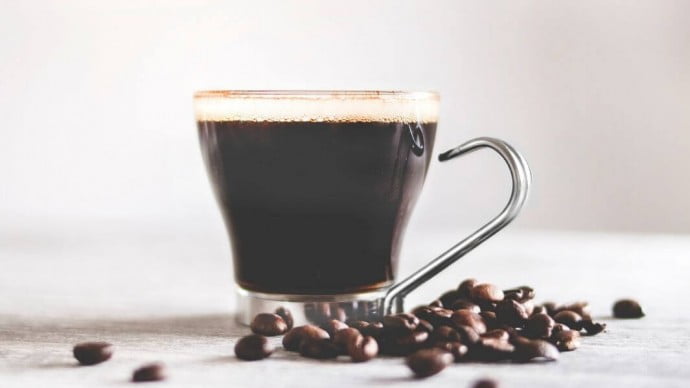 Finally, no stress ordering a coffee! Thanks Italy for keeping it simple.

This isn’t as common in the UK as in America, but again, is an Americanised version of an Italian dish called melanzane alla parmigiana – from southern Italy – aubergine fried and layered with tomato sauce, mozzarella, and Parmesan, then baked. The Americans developed this idea using meat instead and also serve it on top of pasta. The Italians really prefer to keep their pasta course (primo) and meat course (secondo) separate. The abundance of expensive meat in America when the large influx of Italians migrated in the early 20th century is probably the reason for this development. Thus, chicken and veal Parmesan were born. 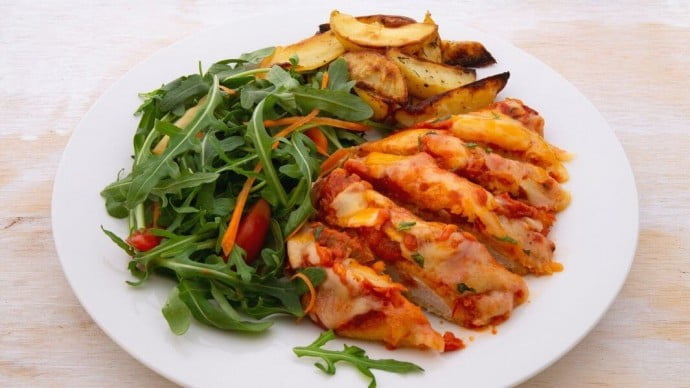 Would you keep your pasta and meat separate?

Now this one even has Italian in its name so it would surely be completely fair to assume that it came from Italy? Well sorry to disappoint, but Italian dressing is another American creation. Italians would never complicate a salad dressing as much as this by adding sugar, spices and the like. In fact, in Italy they often don’t really dress salads at all, and if they do it’ll likely be simply with a splash of olive oil.

Italian dressing was actually only created in the mid-20th century in North America. The daughter of two Italian immigrants decided to make large batches of her family’s salad dressing for her husband’s restaurant. Quickly it became hugely popular to the point where it was being bottled, and the name ‘Italian dressing’ was given to it purely because of her Italian heritage. 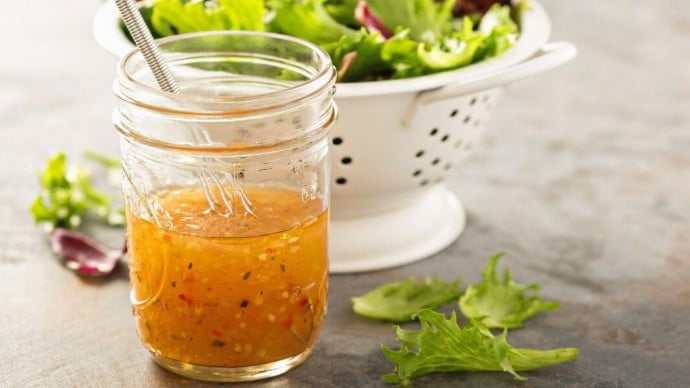 Olive oil is a quick and easy salad dressing!

Don’t worry we’re not going to shock you too much! Carbonara is of course from Italy and is still enjoyed across the country to this day. However, the incredibly creamy carbonara that we see in many British and American restaurants nowadays is certainly not Italian.

In Italy, the sauce is simply made by stirring egg and either parmesan or pecorino in with the pasta while it’s still hot. However, the past 20 years or so has seen double cream creep into some carbonara recipes; something which Italians wouldn’t be at all impressed by. In terms of the meat in a carbonara, strictly only pork cheek (guanciale) ought to be used by even in Italy pancetta will sometimes be used. What is however deemed to be completely unacceptable is the use of bacon in carbonara! 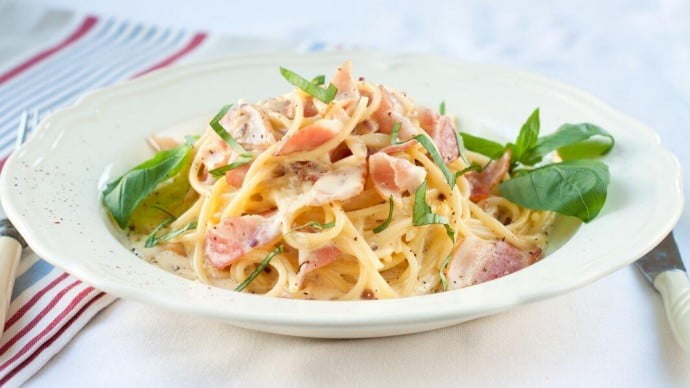 We are very sorry Italy! Can’t miss out on the bacon.

Do you want to learn more about real Italian dishes?

Why not get in touch to ask about our Italian cooking holidays where you have the ability to follow along a local Italian chef to cook the most authentic Italian dishes, not like the one’s above!

We teach our guests how to cook real Italian food with the help of a local Italian chef. If you’re looking for easy, delicious Italian meals to make at home, make sure to check out the recipes on our blog!

Comment below and let us know what ‘Italian dish’ surprised you the most out of this blog!

One comment on “8 Italian dishes that aren’t really Italian”